Jumping Off The Cliff

W hile I am generally outgoing and confident, the process of writing a book has exposed some of my heretofore unnoticed fears about standing out and being noticed. I am certainly venturing into a level of personal exposure that exceeds any I have experienced before.

I have done a lot of work to release the fears, including EFT and NLP, on feeling more comfortable being the center of attention and having an audience. That said, it seem like I have started attracting some novel ways to address the fears that have arisen.

One fear involves risk-taking and was/is rooted in an early experience….

I was on the Bengal Tiger swim team when I was 11. One day, all the cool kids were jumping off of the high diving board. I was younger but very much wanted to be cool, so I, too, jumped off. I didn’t jump, though; I dove. In doing so, I knocked every bit of air out of my lungs and ended up at the bottom – 12 feet down with nothing in my lungs. That was the last time I ever jumped off of anything that high – until this summer.

Some friends came up in August to kayak with my husband and I. Right after we put our boats in and started down the river, we spotted some people jumping off of a large rock that was on the bank of the river. It was about 20 or so feet high. It really looked like fun so we stopped and walked up.

Our visiting friends went first and made it look easy. However, it looked a lot higher from on top of the rock than from below. Plus, when I got up there, the rock was steeply slanted toward the river and my fear of jumping was dwarfed by my fear of stumbling and rolling off the cliff. It was dizzying.

The rock was frighteningly slanted. My heart raced. I felt like I was going to fall.

I slowly shuffled to the edge and paused. I looked around and couldn’t imagine turning my back on the river to go back up – certain that I would fall backwards off of the cliff. There were catcalls from my friends below. Since going back was not an option, I took a deep breath, closed my eyes, and pushed off the rock. 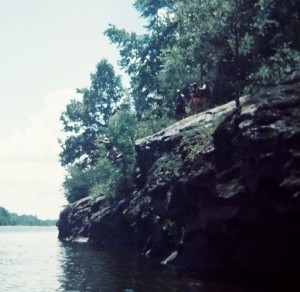 Jumping off The Cliff

BOOM! I hit the water, swallowed way too much, and bobbed to the surface – alive. Whole.

It felt good! That wasn’t good enough, though. I needed to know that it wasn’t a fluke. I had to jump again.

The second time was actually harder. The slope of the rock seemed even steeper than before. The height seemed even higher. Again, I took a deep breath, closed my eyes, and pushed off the rock.

That time I was sure it was for real. It feels like an old fear has been conquered. Not a fear of falling, a fear of risk. It was a fear of stepping into the unknown and risking any outcome. It was about having faith.

Afterwards, I occurred to me that we step off that cliff every moment of every day. The only difference between jumping off of a cliff and driving to the store is your faith in the beneficial outcome. You generally don’t get worked up and fearful going to the grocery store because you know that it will be successful. You know the territory. You have done it before many times.

I saw a guy on TV do a handstand on a chair that was balanced on the edge of an Alp. He was thousands of feet up. Later, scientists recreated the situation on the roof of a skyscraper while the guy was hooked up to an EEG. They discovered that the guy experienced no change in physiology at all. His heart rate stayed the same. He didn’t even break a sweat. He was as cool as a cucumber. He had faith in his outcome.

Every now and then, I replay those moments on the cliff to remind me that I have not even begun to explore the possibilities – that there are many other cliffs to come and each one will be exhilarating. How about you? Where will you find your cliff?